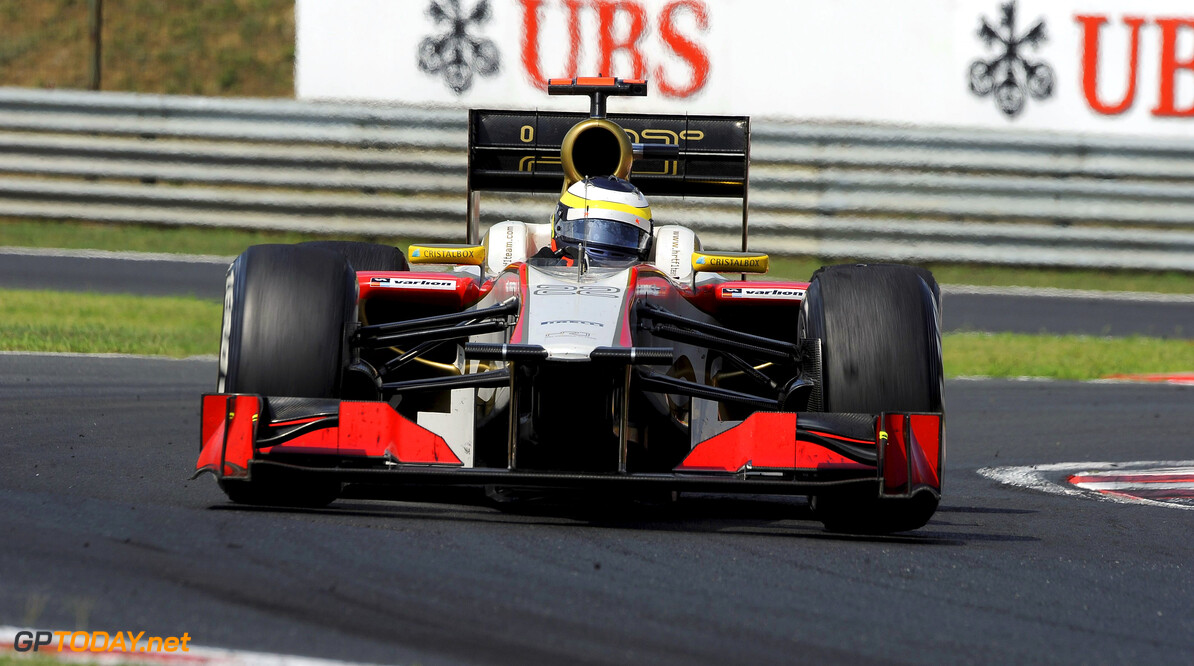 With two seasons behind his back as a Formula 1 driver in 1988 and 1989, and a permanent link with motorsport, Luis Pérez-Sala wasnt entering an unknown world when he was named Team Principal of HRT Formula 1 Team at the end of last year. Pérez-Sala has been at the fore of a project that has experienced a deep transformation in 2012 and, having reached the halfway stage of the season, he assesses what these eight months at the head of the team have been like.

We're at the halfway point of the season, what assessment do you make of these first months?
Perez-Sala: "My assessment couldn't be more positive. Our start to the season was complicated. As we've already said on multiple occasions, we've almost changed the entire team, we've moved to a new headquarters where we've been based since early April, and all of this whilst we built a new car. It was a very ambitious challenge, a priori it was impossible to accomplish, but we've made it with very limited resources. Once we settled in, from April and May onwards, we started to get a race rhythm going. It's safe to say we've encountered some very intense months where the team has given its all, because we've been able to carry out everything we set out to do."

What has surprised you most? And what has been most rewarding?
Perez-Sala: "In truth, nothing has surprised me too much, because I came with an open mind and ready to tackle anything that was thrown at me. What I would say is that the most rewarding thing has been to see the commitment of everyone implicated in this project. These people have been united in very difficult moments and have shown bravery, honour and responsibility to continue supporting this project in the toughest moments. It's not easy to work and perform to the best of your ability having not slept much, being away from home for weeks or going through uncomfortable journeys, but the members of this team have done it, and thats something to be thankful for. And that work and commitment is giving its rewards meaning that, not only us but everyone can start to feel proud and a part of this project."

Would you say that the set targets for this first half of the season have been accomplished?
Perez-Sala: "Yes, we have accomplished the targets we set ourselves, which were none other than to carry out the great structural change which we've done and start to have the necessary stability to be able to grow. This is a target that seems modest but it has implied a radical change. Towards the end of 2011 the decision was made to move the headquarters to Spain, create a new car and have an initial standard that would enable us to be within the 107% comfortably, to then grow from there. And we have achieved all of that, so we can say that we've accomplished our objectives. Now we must set ourselves new ones."

And what's the most complicated challenge that the team has to face?
Perez-Sala: "From here the most important and complicated challenge is to continue growing in the right direction, optimizing our resources, and getting the car to perform better. This is the hardest thing because, whilst other teams have a consolidated structure, we're still in a transition period. In that sense they've also got an advantage over us. But especially because we have limited human and economic resources and that means that the upgrade plan has to be very clear and whatever we introduce will result in an important difference. It really has to represent a step forwards. The most complicated thing now is to not be dropped off by the other teams whilst we finish defining our own team and evolve and prepare the future."

The F112 is a new car completely, what do you make of it? Do you think its maximum potential has been extracted?
Perez-Sala: "I think that, overall, the F112 is a car that has given quite a good result, keeping in mind how it started. In winter I had a lot of doubts, because the car was handed to us and we didn't have enough time to review it. The proceedings and deadlines weren't the usual ones and that forced us to go quicker to make up for lost time and organize the different parties implicated in the project to make it on time. But even with all these obstacles, the car has given good results. It has a good base and that's its biggest strength. It's a reliable car with good mechanical resistance and it offers a lot of possibilities for its development. I'd say were at 50% of its potential and we can still extract another 50%, mainly in aerodynamics."

Will there be any upgrades after the summer break?
Perez-Sala: "Yes, we have some upgrades prepared for the Singapore Grand Prix. As a small team we cant afford small upgrades every two or three races because the cost of an upgrade or creating a new piece for a small upgrade is very high. Besides the aerodynamic study, you have to produce the parts and that also implies a lot of time. So we have to make the most of any changes and have a very clear idea of the direction we want to take for those upgrades to be productive."

We've been able to see how much of an influence the weather has on various races this season. How much can it affect a teams decision making and what challenges does it present during a race?
Perez-Sala: "We're also learning in this aspect. We're not in the fight for points and the fact that we get lapped means that our strategy is always conditioned. But it serves us to accumulate experience and, hopefully not in too long, when we're a part of the battle for points or a fight for better positions, we will be much better prepared to make the right decisions. In any case youve never got everything perfectly under control because legendary teams still occasionally make mistakes, so theres always something to learn."

The combination of Pedro and Narain as official drivers, Dani as reserve driver and Ma in the development programme is proving to be very positive. What would you highlight about each one?
Perez-Sala: "I'd highlight everything about Pedro. He's an extraordinary person and an excellent driver. Apart from his experience hes got a lot of common sense and he acts as the leader of the team. There's no doubt that hes the cornerstone of this project. From Narain I'd emphasize his experience, safety and speed, besides the stability he contributes to the team. Dani is a young driver, with strength and ambition and he's adapted phenomenally well to the team in a position which isn't easy, which is that of the reserve driver. Ma is a driver who will surprise us all because he has great potential. We saw it when he tested the F112 in Silverstone, where he showed his quality. He's a hard worker and he has also adapted perfectly. I'm very proud and satisfied with the structure of drivers that we have and each one plays their role perfectly.

What needs to happen for you to consider this a successful season once the championship is over?
Perez-Sala: "For me it would be a success to maintain the reliability we have and improve our performance a little bit more. To achieve this I hope that the aero package that we will introduce after the summer will help us to take the next step. The objective is to stay between the 104 and 105% and have the project for 2013 prepared. If we achieve all of this I'd be satisfied. Besides I hope that the team is fully functioning, with the design and aerodynamics department working at the Caja Mágica, although to achieve this we need a bit more time."

Formula 1 is going through a period of changes with the renegotiation of the Concorde Agreement or the new engines for 2014. Whats the teams view on each of these very important issues for the future?
Perez-Sala: "HRT Formula 1 Teams standpoint is open for now. As for the new ruling on engines, we're waiting to have all the possible information, especially with everything related to the costs that this change implies. We still dont know all the details, but for us it is of vital importance to know them to see where we stand and what decision we make because this takes up between 15 and 20% of the teams budget. This is a change that needs important planning that must be done well. As for the Concorde Agreement, I dont think there will be any problems because, although we're a small team, we feel that were taken into consideration and supported."

After some months of heavy work, what plans do you have for the holidays?
Perez-Sala: "I'm staying with my family in Spain and we're going to spend some days by the beach and others in the mountains. I'm really looking forward to spending some time with them and to disconnect to gain some strength because we've got a great end to the season ahead."
F1 News HRT
<< Previous article Next article >>
.