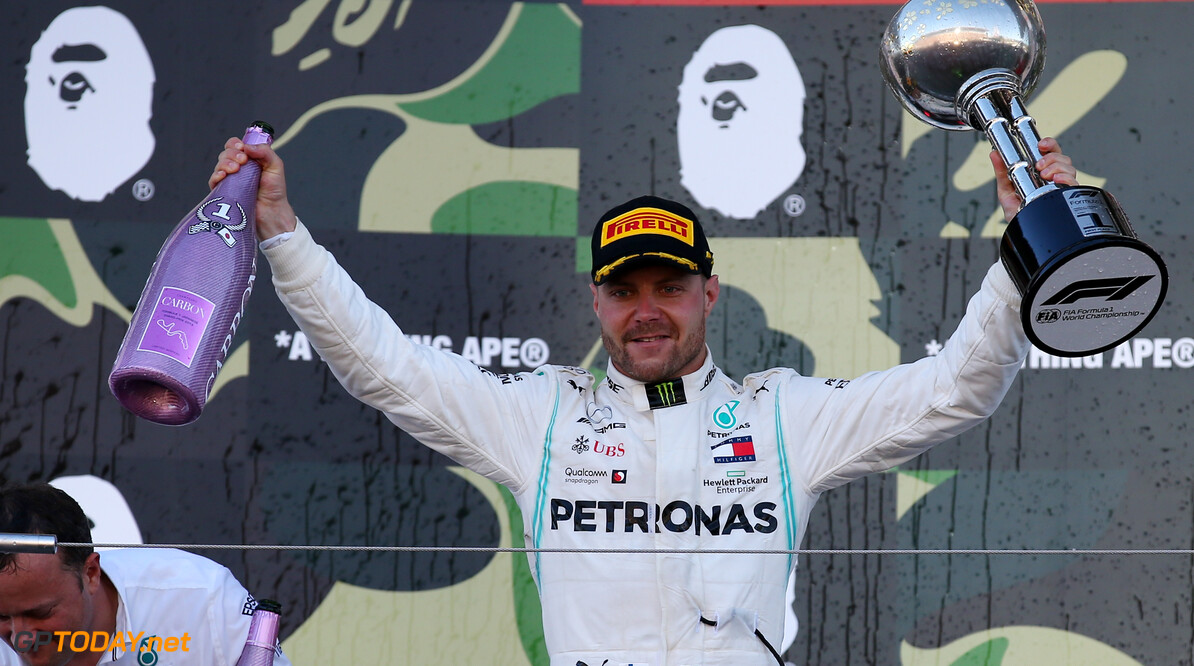 Valtteri Bottas’ long wait to stand on the top step of the podium this year ended in Japan, with the long gap between wins this year perhaps a surprise to some, given the extent of Mercedes’ dominance throughout the opening half of the 2019 season.

The Finnish driver dominated the race at the Suzuka Circuit, a track that is a favourite of the drivers, as any of them will tell you of the great challenge its poses to extract lap time and ultimately success.

The high mental pressure that comes with the expectation to deliver at Suzuka was certainly not helped by Typhoon Hagibis, which not only reduced practice running to two sessions, but also delivered a gap day in which the drivers were left sitting around, twiddling their thumbs.

On Sunday, there was no warm-up, no time to ease into the day, as the first session the drivers were thrown into was qualifying. They were expected to deliver the maximum at a track that’s famously unforgiving after almost 48 hours of no on-track action.

Bottas prevailed over teammate Lewis Hamilton in the shoot-out, keeping up the pace he shown during Friday practice – however Ferrari couldn’t be beaten, as the Scuderia outfit claimed its fifth consecutive pole position.

It must be highlighted that the qualifying session brought with it extra pressure as only hours after the final laps did the race start, meaning any crash would put the driver in question’s start in jeopardy.

A lightning start from Bottas off the start-line mixed with a mistake from Vettel saw the Mercedes driver soar into the lead of the race and into a position in which he never looked back.

During the opening stint he flew away from Vettel behind and was even further ahead after the two completed their rounds of pit stops, with the optimum strategy seemingly being a somewhat rarely seen two-stop race.

Taking his third win of the season, Bottas matches his record number of victories in a single season, as he also claimed three in 2017 – his first year with the Silver Arrows.

The Japanese Grand Prix gave us a glimpse of the Bottas that we saw early on in the year, the Bottas that led the world championship after winning two of the opening four races of the season which led some to believe that he could challenge Hamilton for the title this season.

However, in the next eight races following Bottas’ race win at Baku, Hamilton came out on top in six of them, with Red Bull’s Max Verstappen taking the spoils at the other two.

With four races remaining in the season, Bottas remains the only driver that can halt Hamilton from taking a sixth world championship and his third in a row.

Any such achievement is realistically extremely unlikely, but this win may provide Bottas with a strong confident boost heading into the last races of the 2019 campaign and into 2020.

Bottas was utterly dominated by Hamilton during the midpoint of the season, which allowed the championship gap to grow to what it is now. Is some soul-searching what Bottas needs, to understand how he was able to convincingly triumph against Hamilton over the course of a weekend after being beaten for so long?

Certainly, if he has any hopes of challenging for the world championship in 2020. Beating Hamilton over the course of 22 races will understandably be a tough ask, but it is the mission that he must get on top of should he wish to become a champion of the sport.

Perhaps in the coming races Bottas will display more flair, more fire and more speed compared to Hamilton, who is on course for a sixth world championship title.

Such knowledge to bring into 2020 could be key, if he begin to understand what is needed in order to come out on top and join the prestigious group of Formula 1 world champions.