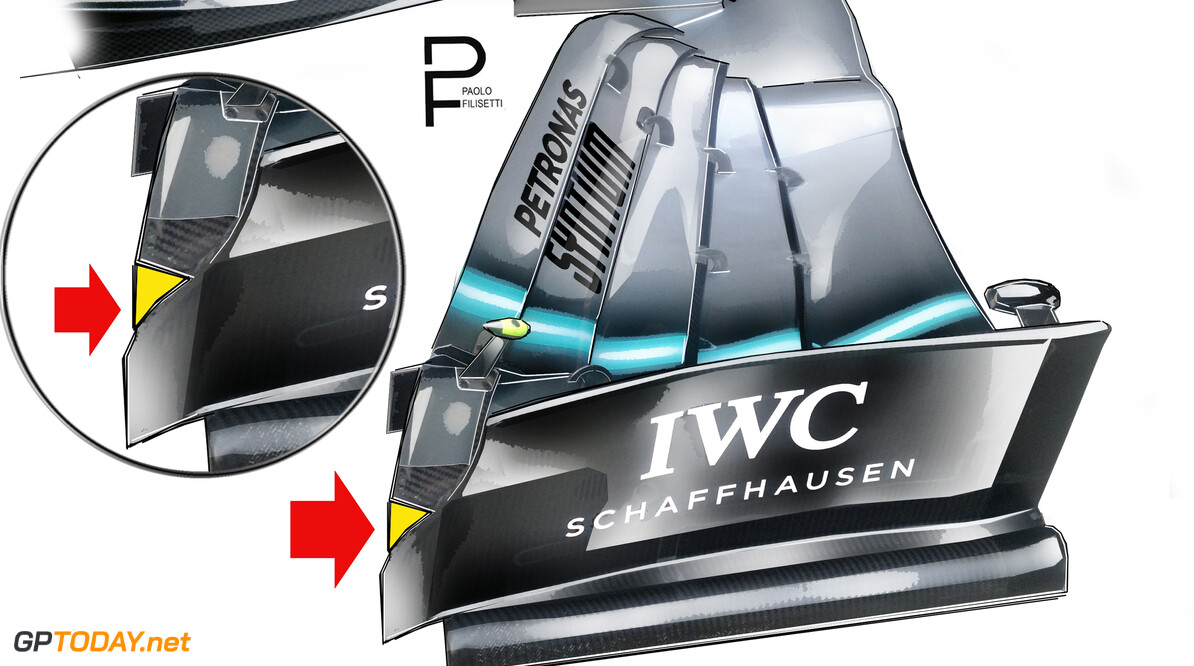 Technical: The updates brought by Mercedes, Ferrari and Red Bull in China

The current F1 ranking, without any doubt, depicts a domination of Mercedes. Ferrari meanwhile started the year with high expectations following the positive winter tests in Barcelona, have been just able to confirm that the project of the SF90 is good, as it was prevented taking the victory due to an electric short circuit suffered by the power unit ECU on Leclerc’s car.

In China, the SF90 weekend started on a positive, taking the lead in FP1 and also quicker than Mercedes in FP2. The best sector of the track for it was the last one as it that exalted the performance of the Italian car. Mercedes team principal Toto Wolff was quoted saying that probably Ferrari was more capable than Mercedes to exploit since it had the full potential of the power unit, compared to Mercedes.

Wolff pointed out the engine calibration of the two power units as the main reason for the pace gap. Having said that, what happened in terms of technical development in China, was a sort of paradox. In fact, it is undeniable that at the level of the car's developments brought to Shanghai, Mercedes drew deep inspiration from its Italian rival, as it was considered a valid benchmark in terms of some aero solutions.

Even if it is crystal clear that the design concept of the W10 is radically different from the SF90 one, and especially its aero concept is based on the in the wash of the turbulence generated by the front wing, at  Brackley they tried to adopt the outwash concept of the Ferrari front wing.

The concept, in few words is based on the fact that the turbulence is diverted outside the front wheels, keeping all the disrupting airflow well outside the central section of the car and its floor. The advantage of this concept can be explained in a less critical central area of the car, by the airflow concentration point of view. On the SF90, bargeboards and turning vanes are less complex, and their function is marginal compared to the ones of the Mercedes W10.

The airflow congestion at this point of the Brackley based team's car implies a complex management and diversion of the various vortices. In detail, part of the airflow is directed underneath to feed the bottom of the car, while another portion is directed towards the sidepod inlets.  Turbulence, hence, is directed outwardly but behind the front wheels using multiple vortices generators for this purpose. The front wing brought in China by Mercedes sported revised endplates, with a different sinuous rear edge in front of the wheels.

It opened a gap between the endplate and the tyre, so to let the boundary portion of airflow divert outside. The FIA considered this not compliant to the rules, as the flap extremity was visible from the side of the gap. In a directive sent to the teams the previous week, the separation of the flap from the endplate in its extremity is considered illegal, allowing, in theory, a flexion of the end of the profile not anchored to the endplate, as the downforce load increases.

It is useful to note that the new wing had the main function of increasing the passage of air between the endplate and flap, to generate outwash, not the voluntary flexion of the flap. On Friday night, in order to use the new version of the wing, Mercedes were forced to connect with carbon fibre the end of the flap to the endplate, so to be allowed to adopt the new wing for the rest of the weekend.

An almost equal situation involved the Red Bull RB15 with a new front wing, introduced with the purpose of generating outwash. In this case the terminal rear section of the endplate had a profile too thin (sharp) and it was required to thicken the upper and rear edges to be able to use it. As for the SF90, instead there have been no visible changes to the aero parts. On the other hand, due to the failure of Leclerc’s control unit in Bahrain, a previous specification one was adopted, mounted on both cars and also adopted by the Haas.

This control unit, however, does not seem to guarantee, according to some sources, the same performance as the original part. It could not be definitively and satisfactorily modified on time for China, so in Maranello they chose the option of an already tested element, used in the second part of the last season. If the performance of the power unit was really limited by this solution, it seems obvious that it would be desirable for Baku, (the circuit layout implies that power output has considerable relevance).

The version adopted in China, however, we can say brings further negativity requiring a different installation on the single-seater, due to its shape and size. For these reasons, it was not adopted by Alfa Romeo, and Giovinazzi, as consequence, was hit in qualifying by the same failure of Leclerc in Bahrain. 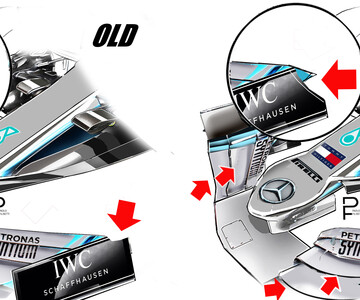 This comparison between the previous configuration of the front wing of the Mercedes W10, and the one introduced in China, shows the main differences. The endplate, now sports a sinuous profile in front of the front wheels and makes the end of the flap visible. The profile main of the wing with a greater upward curvature is also different, increasing the effect of outwash. 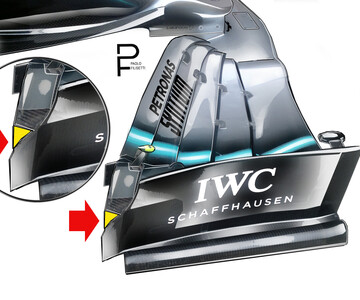 Mercedes, on Friday night, had to modify the new win, connecting the end of the upper flap to the endplates by adding a carbon skin (detail). In this way, the possibility of the flap flexing at full load was eliminated, thus eliminating the reason of the initial non-conformity declared by the FIA 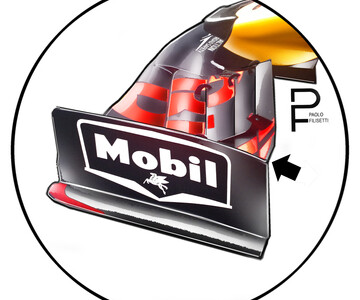 The new front wing of the RB15 is characterized by a different profile of flaps with the upper one bent downwards in correspondence of the endplate. This one bends towards the outside is characterized by a very sharp profile in its rearmost section. In fact, the stewards considered the radius of curvature of its edge too small, asking for a thickening of the upper and rear edges. 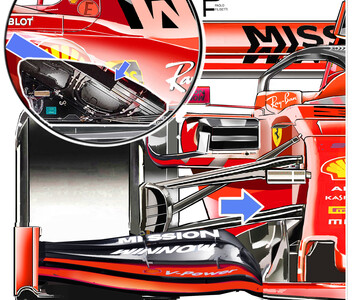 Both the SF90s and the Haas, in China, were equipped with an ECU specification antecedent to the one adopted up to Bahrain. In the detail, we can see the miniaturization of radiators and the complexity of the ducts, which were initially (wrongly) thought to be the trigger of the fault Leclerc suffered in Sakhir. The green arrow, instead, indicates the position of the ECU of the Power unit. The one adopted in China required a different and more complex installation. 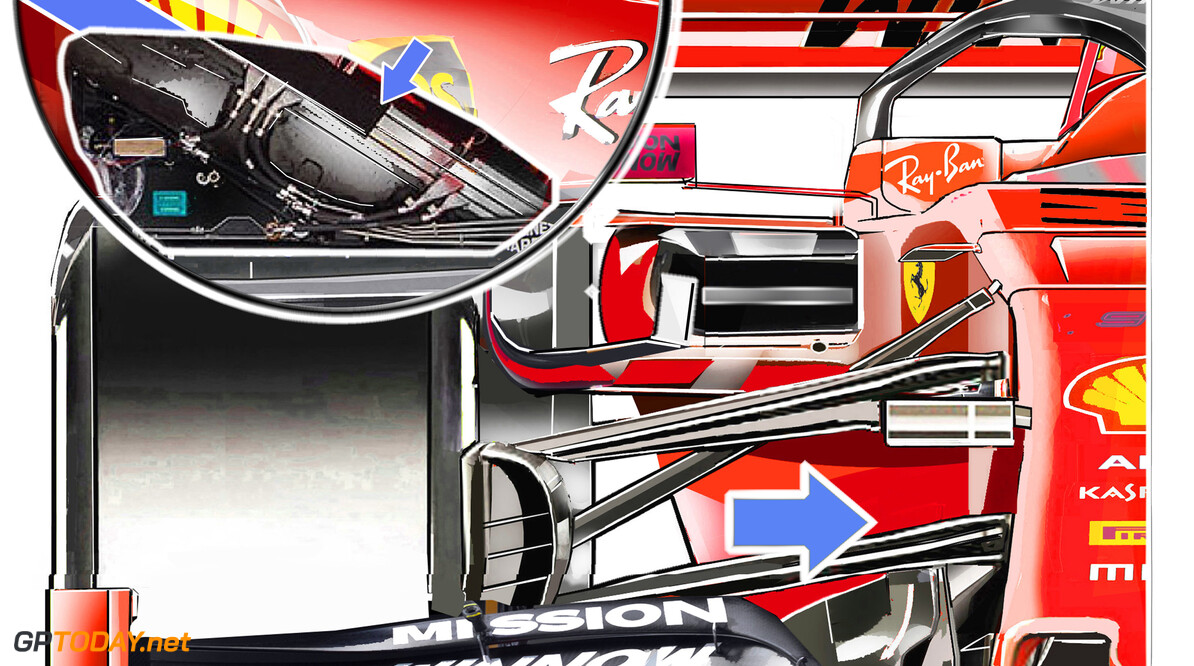 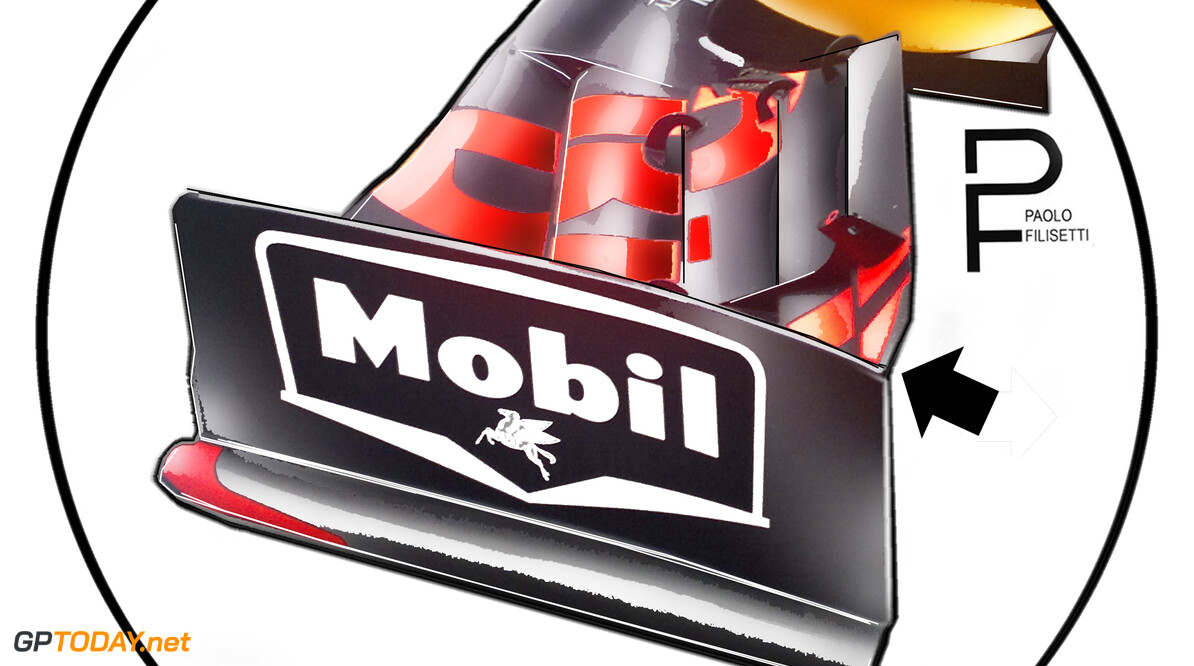 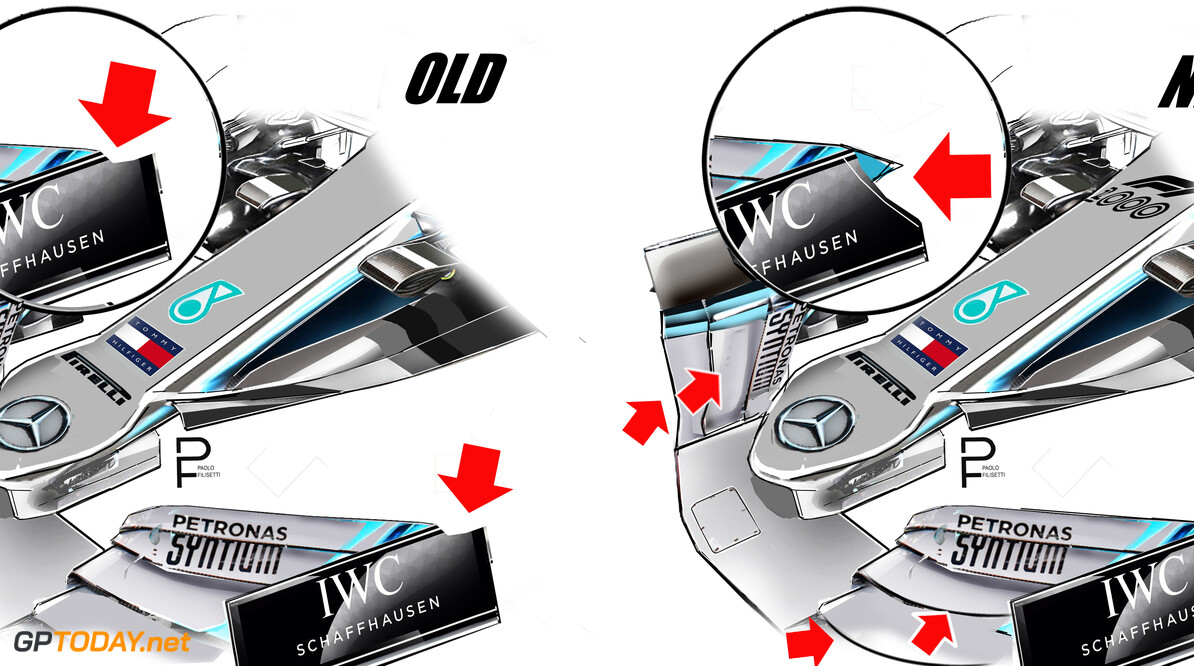