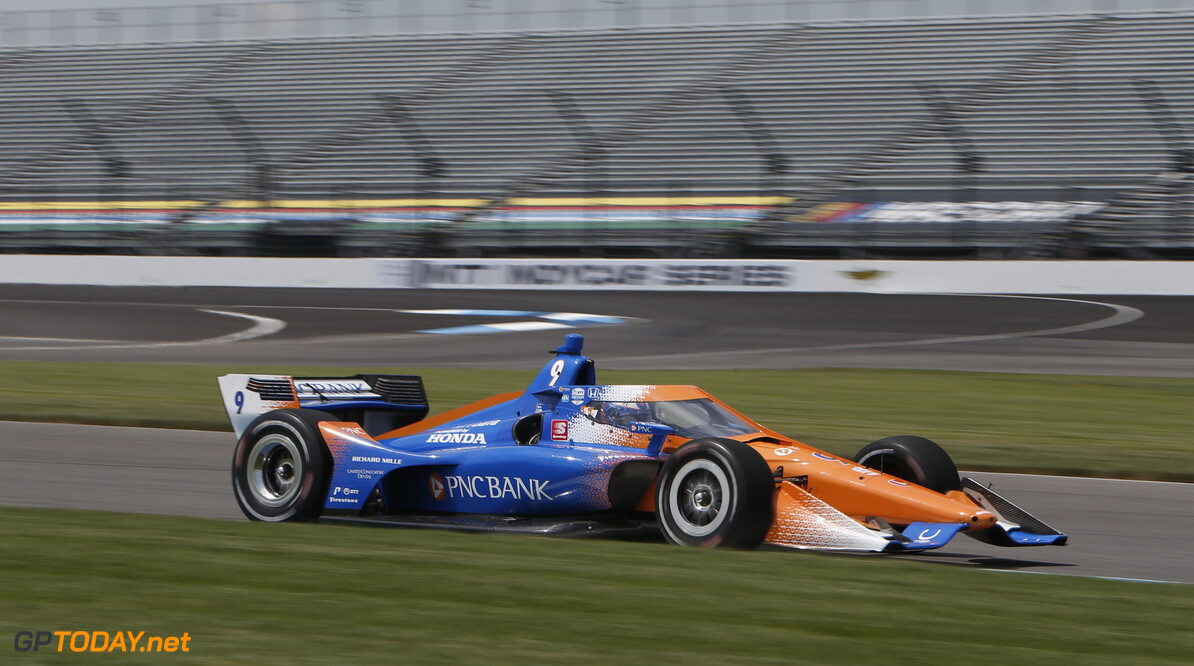 Chip Ganassi Racing's Scott Dixon took the chequered flag this afternoon at Indianapolis to win the GMR Grand Prix ahead of Graham Rahal and Simon Pagenaud in a historic day that saw both IndyCar and NASCAR compete at the same venue for the first time.

Will Power got a great getaway from pole as the race went green, while behind Jack Harvey made slight contact with Rahal as the cars approached turn one.

Dixon in sixth opted to use the harder Firestone black compound for the start of the race as Oliver Askew dropped down from fifth to eighth in the opening laps.

Rinus Veekay was the first driver into the pits after he made an early stop five laps into the race, switching to the softer red compound tyre, with a number of drivers, including Dixon doing the same in the following laps.

Ryan Hunter-Reay was briefly held up as he pitted, as a wheel gun got caught underneath the front left wheel of Andretti. He was quickly on his way despite losing a couple of seconds.

Rahal managed a long run to eventually pit on lap 26. However, it was a poor stop for Santino Ferrucci, who lost a lot of time in the pits as his crew encountered issues with the right rear wheel nut.

The race saw its first caution on lap 36, as Askew failed to catch a slide coming through turn fourteen and ended his day in the wall. This prompted second pitstops from Power, Josef Newgarden and Harvey.

Colton Herta and Veekay crossed the line in fourth and fifth, while Marcus Ericsson and Newgarden finished in sixth and seventh.

Rahal held the lead as the race returned to green from Spencer Pigot and Conor Daly. Behind, Alexander Rossi suffered more issues as his Andretti suffered a misfire on the restart and was forced to retire.

Dixon moved into the lead on lap 48 with a move on Rahal into turn one and instantly pulled away on the faster red compound tyres. Rahal pitted for the final time on lap 55, while Dixon decided to also pit.

Power's day went from bad to worse after stalling while exiting the pit box, forcing his time to restart his engine. Rain threatened the circuit with seven laps to go as Marco Andretti and Zach Veach both went off the circuit.

Dixon would take the win from Rahal by over twenty seconds from Rahal and take his 48th career victory in the process, while Pagenaud would finish third after a terrific drive from 20th position.

Eighth and ninth went to Pato O'Ward and Ferrucci as Takuma Sato settled for tenth.