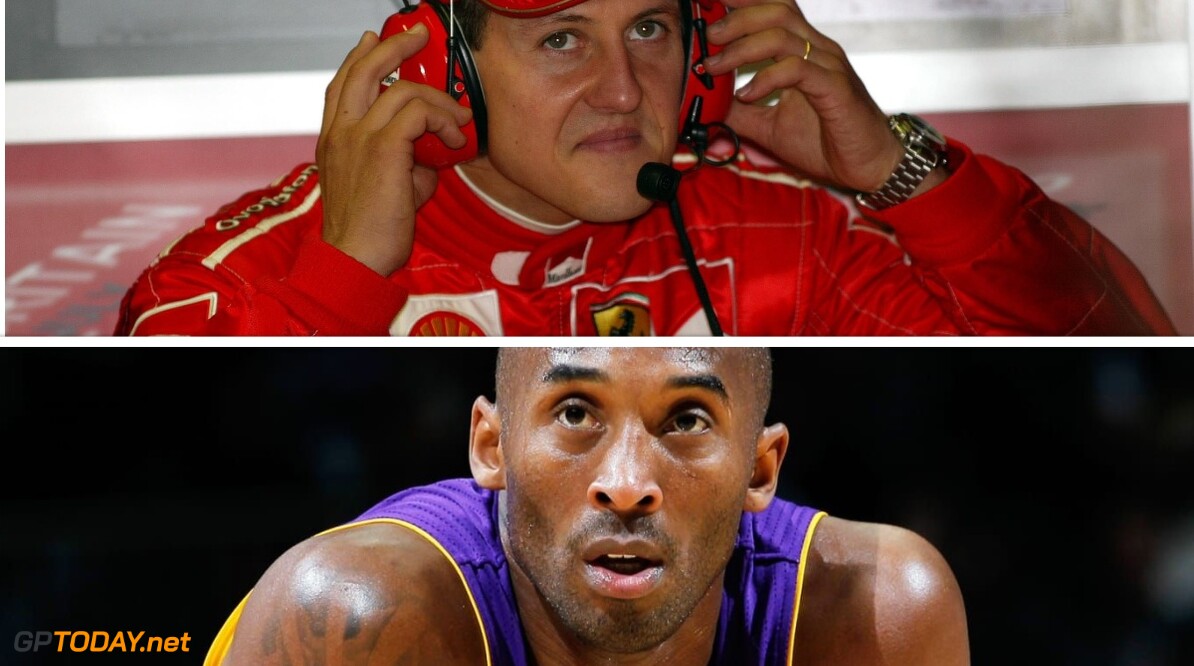 The world lost a sports legend on Sunday, as basketball player Kobe Bryant, along with daughter Gianna and seven other passengers, died in a tragic helicopter accident. He was only 41 years old.

Bryant is one of the best and most successful basketball players of all time. His death hurts, both in the sports world and with this author. Black Mamba was the reason that I started fanatically following the NBA and will therefore always be synonymous to the largest basketball competition in the world.

You may be wondering why on a motorsport website, a column is dedicated to a basketball player. The reason is simple: Bryant reminds me of one of the most successful Formula 1 drivers of all time - Michael Schumacher.

You can't deny that Bryant and Schumacher, after their glorious careers, had a tragic accident that determined their fate. Bryant's situation is described above; he sadly died in a helicopter crash. The situation of Schumacher is also known. It is unclear how he is doing after the accident while skiing in France, but we do know that he is still alive.

It would be great if we ever see Schumacher again on the circuit, so that he can encourage his son Mick in his pursuit of success.

That brings me to the second connecting factor between Kobe and Michael. They both have a child who is enormously talented in the sport they practice themselves.

Mick is on his way to follow Michael in Formula 1. He is part of Ferrari's Driver Academy and is racing in Formula 2, but unfortunately has not got his father by his side to support him. For Gianna 'Gigi' Bryant, she cannot achieve her dream of reaching the WNBA (the American basketball competition for women). By Kobe's side, she was also killed in the fatal crash while en route to a tournament for young basketball players.

Gigi had the Mamba Mentality from her father. And it was clear that they spent many hours together in the gym, as this clip shows.

I hate seeing my #teammamba girls play against each other. This is GREAT defense by our mamba pg Alyssa Altobelli and a familiar looking fade by our 2gd the #Mambacita

Who taught these moves to Mambacita? The Black Mamba shows how it’s done, with tight defence from LeBron James.

Although Bryant and Schumacher were both sometimes involved in controversies, they will mainly be remembered as sporting heroes, with the table below of prizes and successes speaking for itself.

They both largely owed their success to two factors. On the one hand, Bryant and Schumacher were among the right team to achieve successes, but their enthusiasm for work and their enormous will to win have undoubtedly contributed to the successes achieved. It is known that Schumacher used to take a mobile gym to the circuits so that he could work on his fitness during the grand prix weekend.

Kobe was also an incredible training animal. A trainer from the United States national basketball team was called by Bryant for additional training for the Olympic Games. The time: 4.15 AM. The individual training started at 5 AM, after Kobe had already done some exercises on his own: first an hour of conditioning, then an hour of strength training. The trainer left the facility at 7 AM, but Kobe stayed to practice shooting. When the trainer returned at 11 AM, Kobe was still there. He had not left the gym, after which he joined the team's training.

That is the core of Mamba Mentality: the iron will to want to win, to put everything aside for that, and also to work hard to get it done. Of course, they were also blessed with a healthy dose of talent.

Their mentality and talent sometimes made the impossible possible. Schumacher, who finishes the Spanish Grand Prix in fifth gear and nevertheless comes home in second. The incredible rain race that he drove at the same track in 1996. Ditto for Kobe: 81 points against the Toronto Raptors on January 22, 2006, the second-highest score for an individual player ever in the NBA. Or his farewell match in April 2016: 60 points, the highest number of points that someone scored in that season.

Schumacher and Bryant are part of a relatively small group of athletes who could achieve more than seemed possible. For Kobe, he also wants to be reminded that way: "I want to be remembered as a talented overachiever." He succeeded.

Thank you for the memories, Black Mamba. Keep Fighting, Michael.